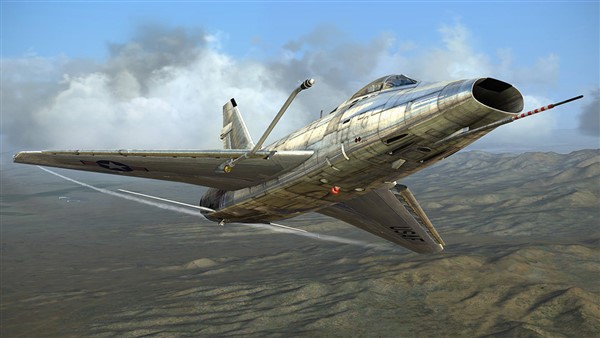 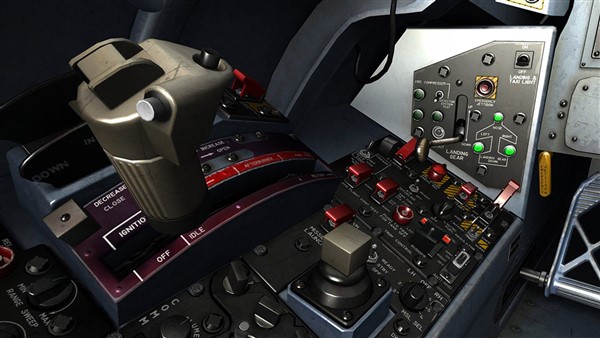 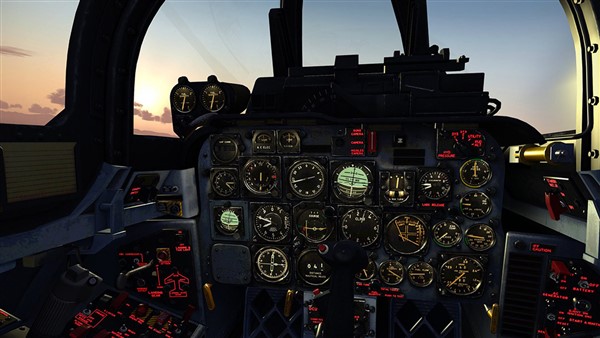 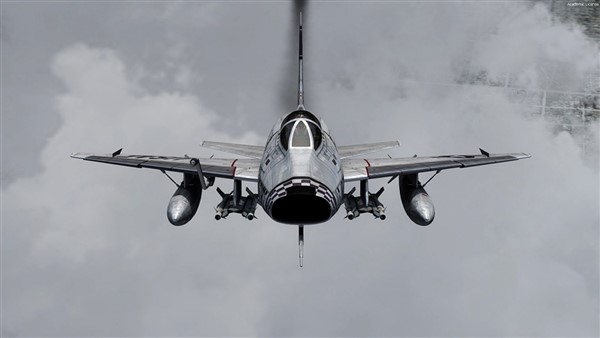 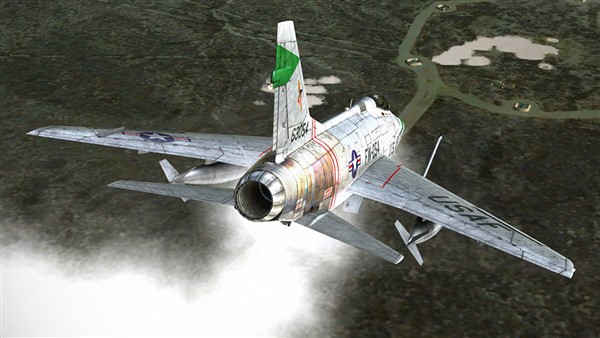 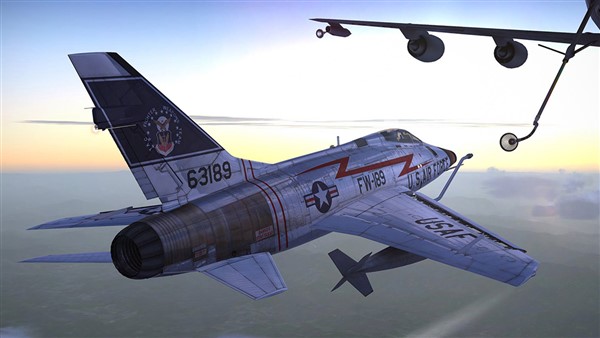 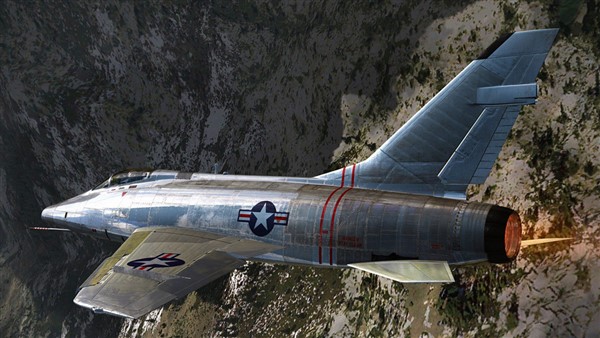 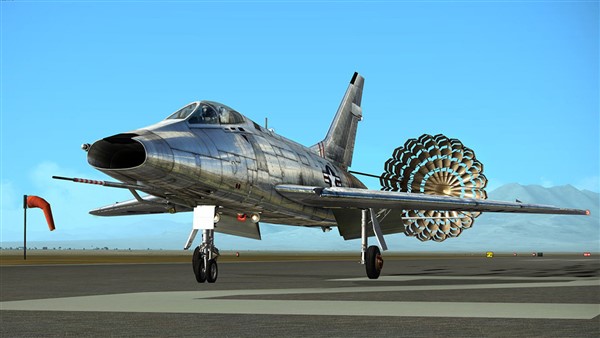 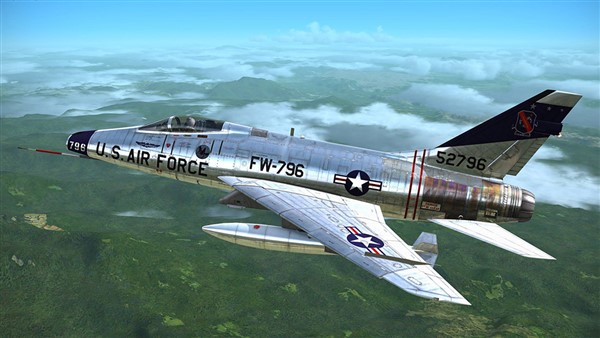 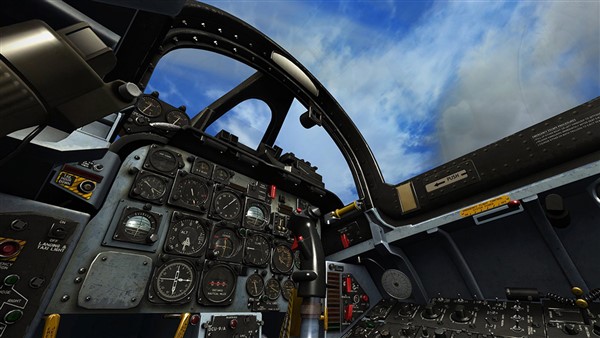 Ultimately adapted for a variety of roles, it was widely used in an air-ground capacity, with four fighter wings in Vietnam flying over 360,000 combat sorties.

The sleek, swept-back-wing aircraft that gave the United States a supersonic Air Force also proved to be a leader in many other ways, with many firsts and records achieved. In addition to setting multiple world speed records, it also won the Bendix Trophy in 1955, set a distance record in 1957, accomplished the first buddy refueling, and even became the first jet fighters to overfly the North Pole.

We are pleased to show off our new F-100D Super Sabre, representing a continuation of our long standing tradition in providing top notch military simulations as well as the continual introduction of new features and technology. Not content with the superb detailing both inside and out, or the highly realistic texturing and paint, our team went all out in re-creating nearly every detail in this powerful and historic aircraft.

Realism and immersion begins and ends in the cockpit. Faithful modeling lets you find every control and switch where it should be, with a very large amount of them fully functional and operable just as they are in the real aircraft. Systems have been extensively modeled, and the flight model is extremely realistic and challenging. Custom 3D gauges let you precisely monitor your aircraft while in flight, and our sophisticated cockpit lighting adds to the immersion on those pre-dawn sorties.

We are very grateful to have had the honour of consulting with a team of four veteran fighter pilots, representing 3800 in-type hours, keenly interested in helping us bring one of their most-loved jets to life. Their logged hours were in a combination of F-100C, D and F models, with the vast majority in the D. The combined experience of our consulting team was instrumental in allowing us to create a truly authentic reproduction.

The F-100D is our first release to feature our new MilViz Aircraft Management System (MVAMS). This application runs outside of the simulator to present a wealth of functionality, ranging from setting default startup options, display options, preset comm channels and weapons load, defining aircraft specific keyboard and button mappings, to dynamically updating a weapons loadout while the simulator is running.
Multi-Platform Support

The Milviz F-100D supports a full range of platforms, in a single downloadable installer:

All F-100D users have the ability to configure and release bombs, use external drop tanks, fire guns, rockets and AIM-9 missiles, jettison station loads and pylons, activate and manually range the A-4 gun sight all with appropriate effect on aircraft appearance and performance.
TacPack Logo

The Milviz F-100D is ready to run with or without TacPack. If TacPack is present, it will detect this, integrating and offering appropriate extended functionality automatically. If TacPack is not present, the F-100D weapon systems will operate, but with some limitations.

Vertical Reality Simulations' TacPack software offers stand-alone weapons and warfare platforms for both Flight Simulator X and Prepar3d. It is a payware product and are not included with your purchase from Milviz. An appropriate, platform specific version of the TacPack software is required for the above described extended functionality and integration in the Milviz F-100D.
New! MVAMS Integration

As of June 2017, our innovative MilViz Aircraft Management System (MVAMS) is now included with the F-100D package.

Our MVAMS utility runs outside the simulator in order to provide not only a unified location for adjusting configuration settings, but it also provides the means to incrementally update individual products to quickly address issues and make fixes when required, without having to have our customers download and reinstall new versions of the aircraft. This allows our customers to quickly discover and install any pending updates for their aircraft, ensuring that they are completely up-to-date with our latest fixes, changes, or technology.
New! Prepar3D V4 Compatibility

As of June 2017, the MilViz F-100D has been updated for full compatibility in the new Prepar3d version 4!