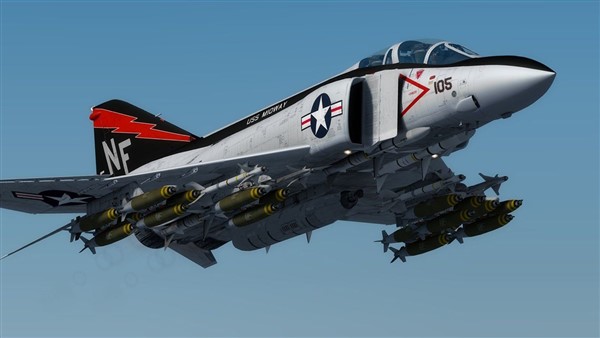 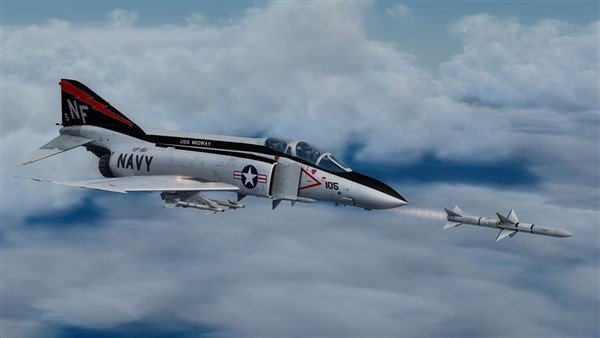 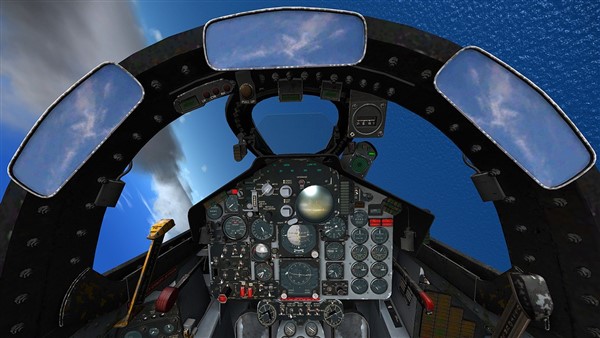 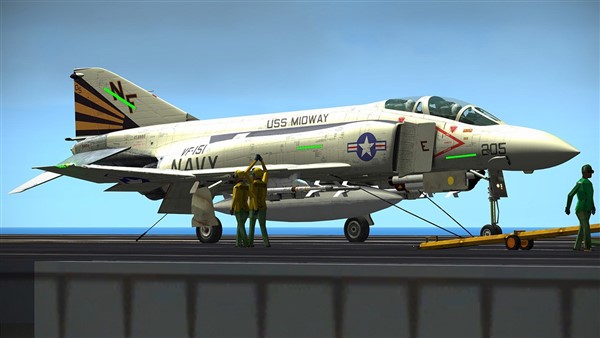 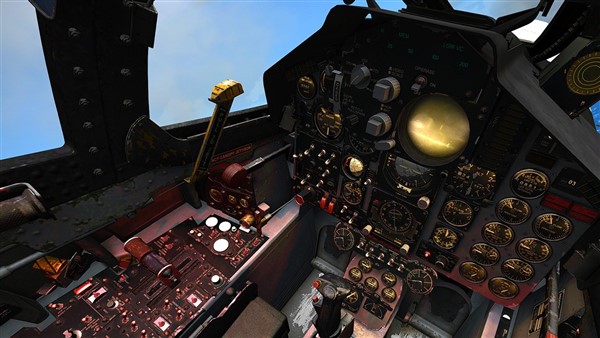 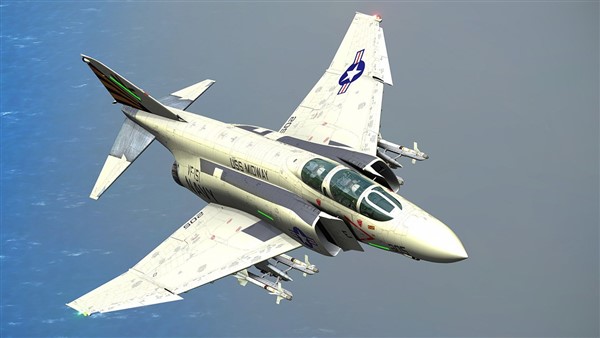 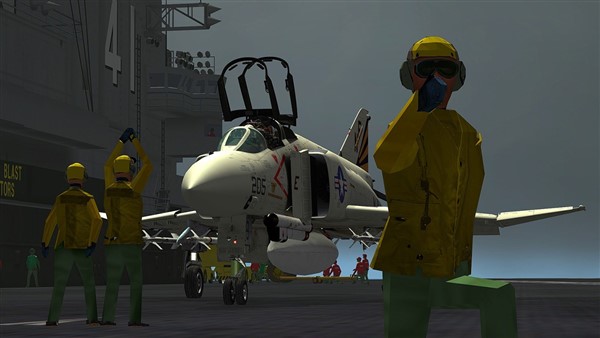 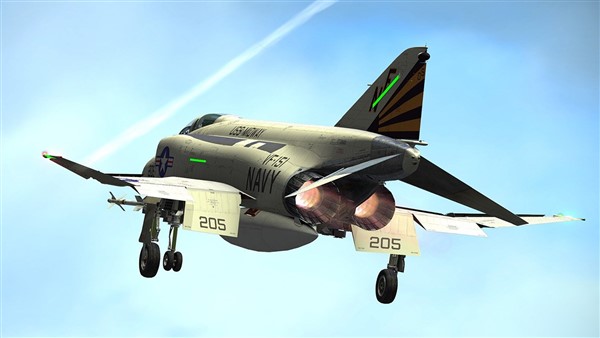 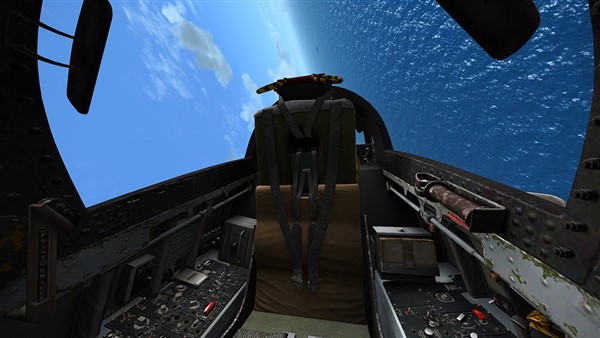 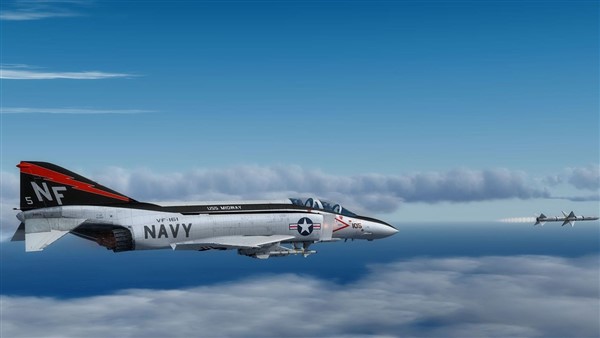 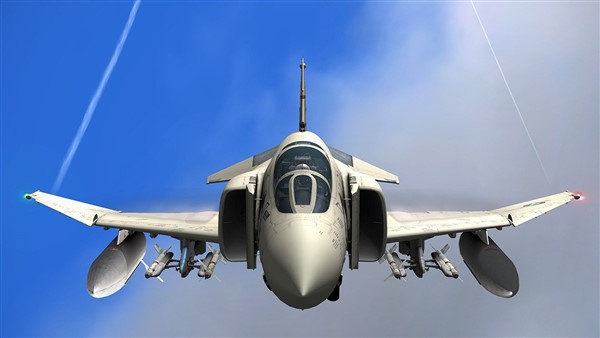 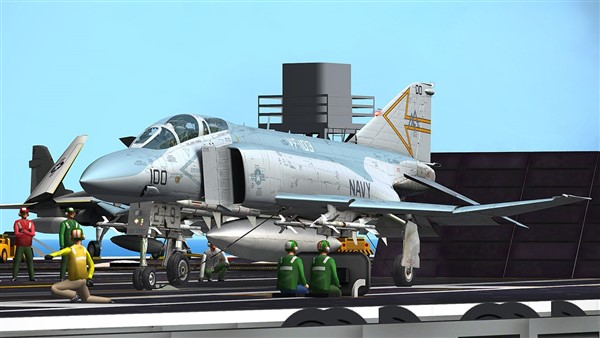 Featuring some of the most advanced systems ever in the FSX/P3D world, this release features a combination of our ADV technology and TacPack

The F-4J, first flown in 1966, was an improved version of the F-4B for the Navy and the Marines. With enhanced air-to-air and ground attack capability, the huge, powerful Phantoms were at the forefront of carrier enabled power projection.

After a production run of 522, deliveries of the F-4J ended in 1972. The F-4J served the US Navy Blue Angels from 1969 through to 1973 this period was the only time that both the Navy and Air Force demonstration teams would fly similar aircraft.

Beginning in 1977, the F-4J was extensively modernized and designated an F-4S. Changes included smokeless engines, improved hydraulics, electronics, and wiring, as well as modifying the wings to increase maneuverability. In total, 302 aircraft were upgraded.

On 25 March 1986, an F-4S belonging to the VF-151 ""Vigilantes,"" became the last active duty U.S. Navy Phantom to launch from an aircraft carrier, the Midway. On 18 October of the same year, an F-4S from the VF-202 ""Superheats"", a Naval Reserve fighter squadron, made the last-ever Phantom carrier landing. By 1987, the last of the Naval Reserve-operated F-4S aircraft were replaced by F-14\'s.

We are very pleased to offer our carrier capable F-4\'s, with both the F-4J and the F-4S represented.

Building on our well-regarded rendition of the F-4E, we didn\'t want anyone to think we\'d forgotten about those who desire to fly \'feet wet\'. Our F-4J and S models are fully carrier capable, with appropriate changes made to the models and the cockpit (only the \'S\' cockpit is modelled and will be used for both aircraft), as well as to the performance envelope.

Utilizing every resource available to us and spending countless hours in design, testing, revising, and more testing again, we\'re confident that our model represents an extemely true-to-life rendition of the real world aircraft. We\'ve taken great care in presenting an authentic environment for the virtual pilot closely reproducing the original in looks, systems, sounds and flight modelling.

The cockpit of an F-4 represents a busy, complex workplace for the pilot. However, we\'ve strived to perfect the feel of actually sitting in the pilots seat, being able to scan your vital instrumentation with a glance, all replicated with high resolution textures and smooth 3D animation. Being able to run through checklists, flipping all of the needed switches and toggles, monitoring systems as they spring to life. Being able to light the engines and feel the rumble of the massive turbojets behind you. Every bit of it, in your control and command!

Please note: Only the cockpit layout of the later F-4S is replicated in this release.

We\'ve included a very large selection of authentic weapons and pods to outfit your F-4 with. Our configuration menu lets you setup and configure your payload any way you wish, allowing you to configure for almost any mission. And of course, adding or removing ordinance or fuel will have an appropriate effect on flight dynamics and handling characteristics.

Important: All weapons in the Standard Edition are completely non-functional with the exception of jettison abilities.

Our innovative MilViz Aircraft Management System (MVAMS) is included with this release. It allows for easy control and set-up of many aspects of the aircraft, including configuring the default start-up state, control configuration, aircraft behaviour and more. It also allows for easy notification and application of hotfixes as they are released for your aircraft.

The Milviz F-4J/S supports a full range of platforms, in a single downloadable installer:

Our Advanced Series promotes your F-4J/S experience to a dynamic study-level simulation. It features an external flight model and in-depth systems simulation, as well as full TacPack integration.

"" There is no doubt about it, these are a hell of an add-on.""
- excerpt from the review at Mutley\'s Hangar, where we are very proud to say the F-4J scored a 9.7/10 and received a Mutley\'s Hangar Gold Award!

Short guide covering the operation of the MVAMS utility.

High quality HD paint kit to create your own liveries