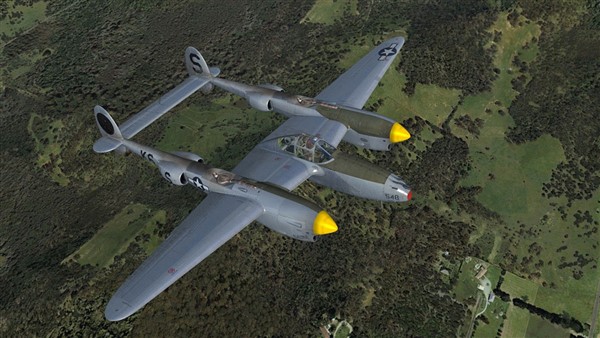 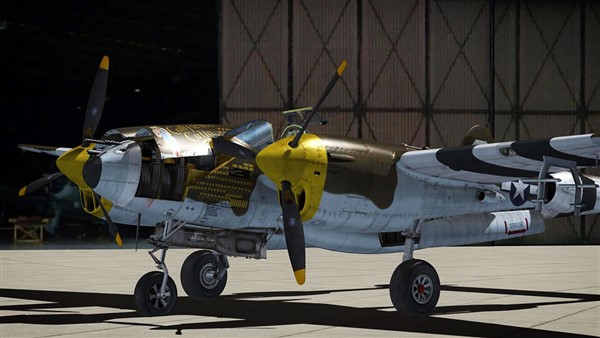 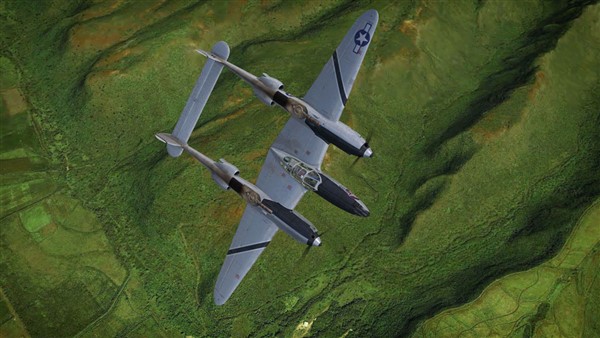 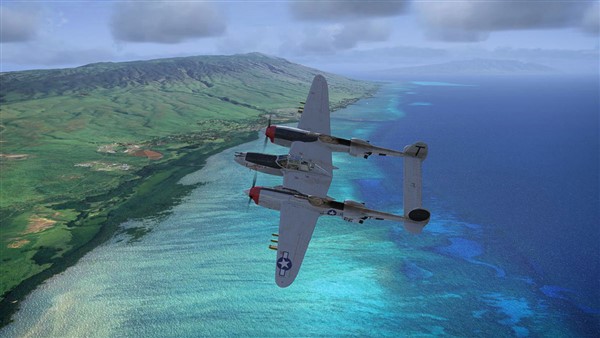 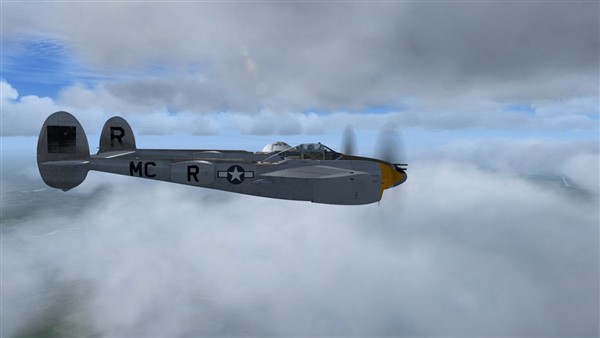 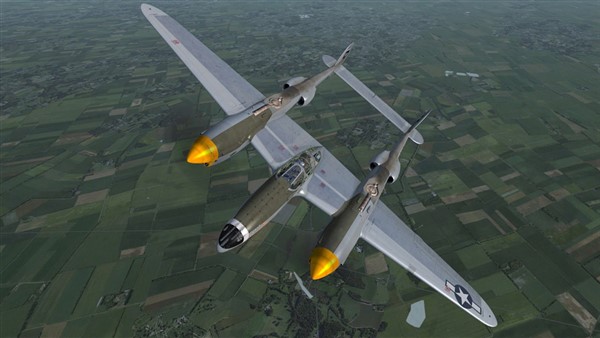 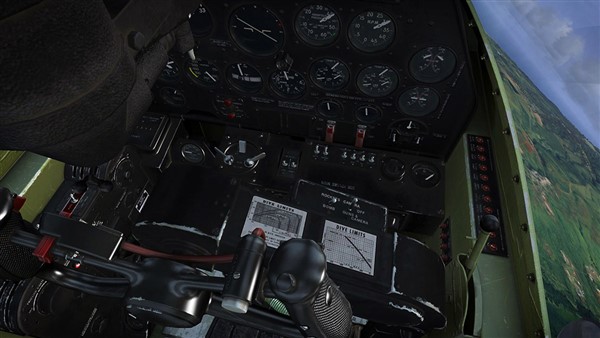 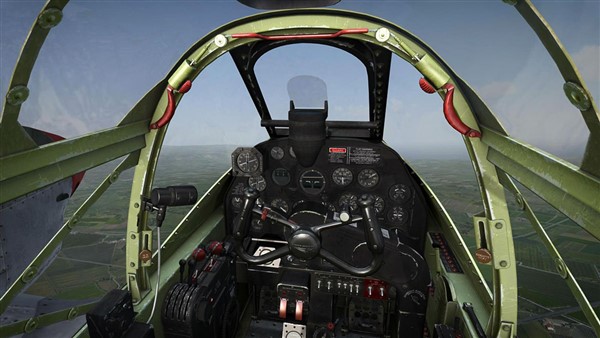 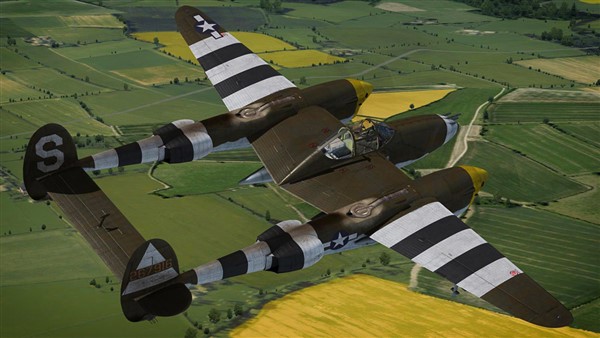 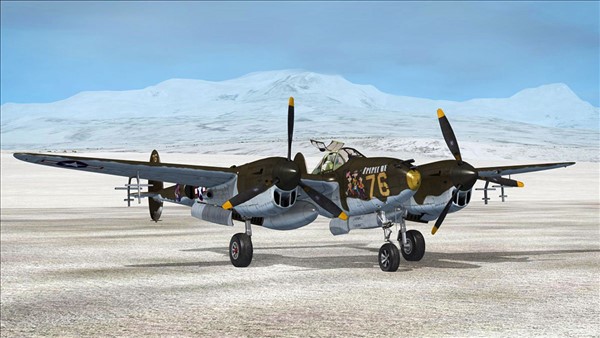 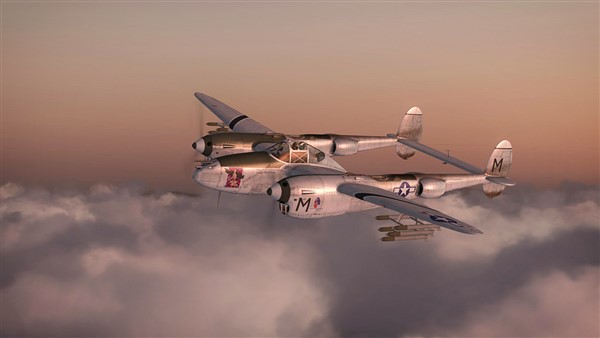 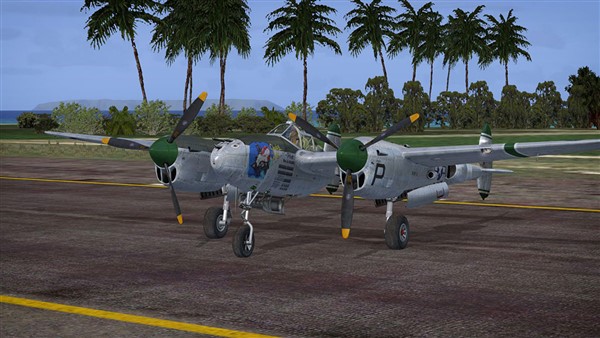 One of the greatest fighters of World War II, the legacy of the P-38 is unmatched. At the time of it's introduction in 1940, the P-38 was capable of climbing 3,300 fpm and could attain a top speed that was 100 mph faster than any other fighter in the world. A range of 1,150 miles, a payload capacity nearing the B-17, a potent mix of four .50 calibre machine guns and a 20-mm cannon combined to deliver a versatile and legendary aircraft.

A total of more than 10,000 P-38's (including 18 distinct models) were manufactured during the war, flying more than 130,000 missions in theaters around the world. P-38 pilots shot down more than Japanese aircraft than any other fighter and, in a reconnaissance role, obtained 90 percent of the aerial film captured over Europe.

As a testement to the effectiveness of the P-38 Lightning, as well as it's fearsome might in skilled hands, the two highest scoring aces in American history, Maj. Richard I. Bong and Maj. Thomas B. McGuire Jr, both flew the P-38 in the Pacific Theater of Operations. Each man received the Medal of Honor in recognition of his courage and accomplishments.

We are excited to present to you the sleek, yet powerful, P-38 Lightning. We've faithfully modeled the 'L' version to a very high level of fidelity, simulating all of the important details that make the P-38 such a distinctive aircraft. From the suggestive rumble of it's twin 1,600 hp turbo-supercharged V-12 engines, to it's deadly "Christmas tree" launch racks laden with high velocity rockets on each wing, our P-38 Lightning is designed to closely match the feeling of the real machine.

We've always taken pride in the quality of what we produce the Milviz P-38L is no exception. Combining 'down-to-the-rivet' accurate modeling with rich, highly realistic texturing, the aircraft seems to come alive, lending a great sense of immersion and life to your experience.

The experience of flight is closely replicated as well. A majority of the aircraft's in-depth systems are fully functional, requiring careful attention to the information presented to you on the smoothly animated 3d gauges. Our realistic lighting effects round out the package, giving the pilots workspace a highly authentic appearence.

Our goal with all of our releases is always to make the aircraft as realistic as possible. As important as it is to make an virtual cockpit or external model look great, replicating how an aircraft actually handles is absolutely essential. The characteristics of an aircraft in flight, being able to recognize the natural limits placed on an airframe by it's design, the effort required to master and safely handle a powerful machine, these are traits where we aim to transform your simulator into a place where you can immersive yourself in the beauty of flight.

The P-38, as with many warbirds, was a very powerful machine. It's impressive rate of climb and very fast top speed were the result of giving the aircraft enough power to haul an extensive weapon load, and giving it the endurance to travel long distances. With that vast amount of horsepower however, limits to the design were soon realized. One of the most serious problems that plagued the P-38 was that of aerodynamic compressibility. Essentially, during very high-speed flight and especially during dives, the aircraft's tail would begin to shake violently and the nose would tuck under, steepening the dive. Once caught in this dive, the fighter would enter a high-speed compressibility stall and the controls would lock up, leaving the pilot no option but to bail out (if possible) or remain with the aircraft until it got down to denser air, where he might have a chance to pull out. It was finally determined, after much trial and error, that installing dive flaps on the P-38 was the ultimate solution.

In our P-38L, we've tasked Bernt Stolle with creating the expertly refined flight model. Not only will you be able to fly it 'by the book', you'll be able to recreate many of the same issues that real P-38 pilots faced, including that of high-speed compressibility. Our model displays behaviour consistent with the actual aircraft you'll need dive flaps when entering a dive, or you'll need to employ the same techniques as recommended when in a compressibility stall. Indeed, you'll have to be very mindful when flying the P-38 at it's upper limits!

Included in the package are 21 high resolution liveries, created with extreme attention to both detail and quality. Many of the included liveries are representations of P-38's that have seen service, and where available we've included the pilot and deployment notes. After all, the P-38 is not only a significant part of aviation past, but also plays a very important part in the history of WWII as well.
Multi-Platform Support

The Milviz P-38L now supports a wide range of platforms, in a single downloadable installer:

All P-38L users have the abiity to configure and release a variety of animated armament, including fuel tanks, with the appropriate effect on aircraft appearance and performance.

Selected from the multi-installer at time of installation, the TacPack version provides functionality for the P-38's gunsight, the .50 calibre machine guns, the 20mm autocannon, the 10 high velocity aircraft rockets (HVARs), as well the ability to drop 500lb bombs.

Vertical Reality Simulations' TacPack software offers stand-alone weapons and warfare platforms for both Flight Simulator X and Prepar3d. It is a payware product and are not included with your purchase from Milviz. An appropiate, platform specific version of the TacPack software is required for the above described extended functionality in the Milviz P-38L.

This package includes a TacPack enabled version the TacPack version requires a working installation of the TacPack software (not included).